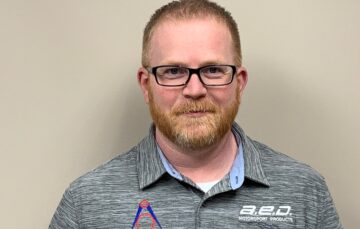 Meet Dwayne Young, our General Manager. Dwayne started working at A.E.D. METAL PRODUCTS in December 2019, began in sales and was later promoted to General Manager. Dwayne has been around A.E.D. since he started in the metal business in 1997. First as a friend, then a customer and then a driver of one of the steel suppliers/vendors, which led A.E.D. to offer him a job.

Dwayne started in the metal industry in 1997 and has done several jobs including: manufacturing, warehousing, Class A CDL Driver, Union Stewart, Lead driver and CDL Trainer. And like all of us at A.E.D., Dwyane “likes the family atmosphere and the customers.”

His positive attitude and willing to help others whenever needed is appreciated by his coworkers and customers alike.

Dwayne likes to travel, camp and be outside with his two sons and also Cooper: his Catahoula Leopard dog.

PLEASE COME VISIT A.E.D. METAL PRODUCTS AND BOYCE INDUSTRIES AT PRI FROM DECEMBER 8TH THRU THE 10TH AT BOOTH 5159.

The items below are new, American produced, WEBCO material, prime 4130 material with certs available if required.

Let us know what footage you are looking for, call us at 317-334-0569 or send request for quote to sales@aedmetals.com

* All material is subject to prior sales and not valid with any other offer.